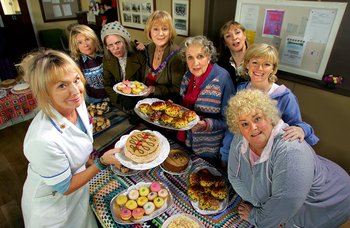 A British comedy-drama written by Jennifer Saunders, of French and Saunders and Absolutely Fabulous fame, with an all-star cast of British comic actors including David Mitchell, Dawn French, Sally Phillips, Simon Farnaby, Pauline McLynn, Joanna Lumley, and Saunders herself. It ran between 2006 and 2009.

Widowed nurse and pillar of the community Sal (Sue Johnston), looking for something to occupy her suddenly abundant free time, finally bows to pressure to join the Ladies' Guild in the small village of Clatterford St. Mary.

In the United States, the show's known as Clatterford. The British title has nothing to do with the city of Jerusalem; "jam and Jerusalem" is a phrase often associated with the Women's Institute and similar ladies'-guild-type organizations in Britain, and refers to the cliché that such groups are fond of doing homey, quintessentially English things like sharing jam recipes and singing hymns like "Jerusalem" (a.k.a. "And did those feet in ancient time").