Film / The Girl and the Echo 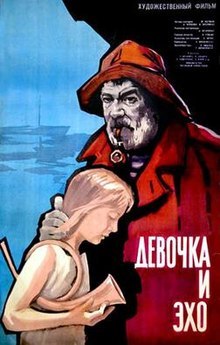 The Girl and the Echo ("Девочка и Эхо", "Devochka i Ekho"), also known as Paskutine Atostogu Diena ("Last Day of Holidays") is a Russian movie by the famous director A. Zherbjunas (who later went on to create such classics as "Let's wait till monday"), based on the short story The Echo by J. Nagibin.

The story revolves around Vika, a dreamy girl on vacation (hence the other title) who loves the sea, mountains and echoes, and does not want to fit in with local kids, and Romas, a boy also on vacation, who does want to fit in, but cannot. The boy becomes her confidant and their friendship blossoms, but then she is harassed by bullies and the boy doesn't muster up courage to stand to her, which ruins their relationship forever.

The film achieved a Cult Classic status in USSR and was a "Blockbuster" - despite nearly being shelved and receiving little advertising, even by Soviet standards.