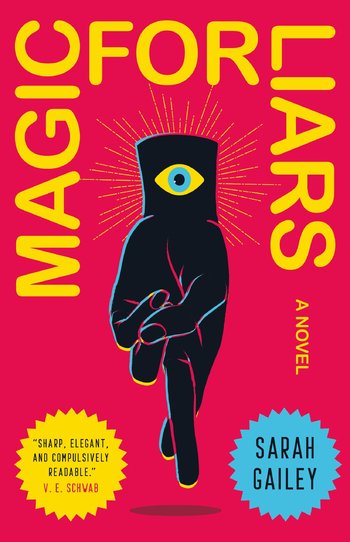 Ivy Gamble was born without magic and never wanted it.
Ivy Gamble is perfectly happy with her life – or at least, she’s perfectly fine.
She doesn't in any way wish she was like Tabitha, her estranged, gifted twin sister.
Ivy Gamble is a liar.
Advertisement:

Magic for Liars is a 2019 Urban Fantasy Detective Drama written by Sarah Gailey.

Ivy Gamble is a Private Detective who spends her days following cheating spouses and drinking. And then she gets a visit from the Headmaster of the Osthorne Academy of Young Mages, a school for magic users. The Headmaster wants her to solve a gruesome murder that the magical authorities have already signed off as an "accident." Ivy wants to go to the school that her sister, Tabitha, teaches at and see how the other half live. Because when they were children, Tabitha was magic...and Ivy wasn't.

But as Ivy gets pulled into the case, she begins to get entangled in the inner lives of the staff and the students, from the manic young man who believes he's The Chosen One to the white-haired old woman who is more powerful than anyone around and can disassemble you with a glance.

All in all, Ivy has her work cut out for her. She just has to make sure it doesn't cut her first.

Tropes included in Magic for Liars: