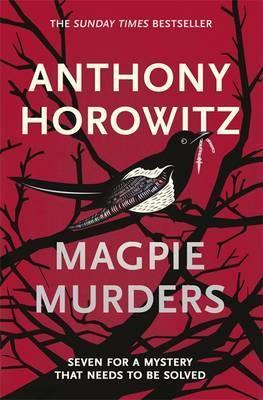 Magpie Murders is a 2016 mystery novel by Anthony Horowitz. A work of Meta Fiction, it is actually two Fair-Play Whodunnits in one. The plot concerns a London-based editor named Susan Ryeland who is given the manuscript of best-selling mystery writer Alan Conway's latest novel, Magpie Murders. Like Conway's other books, it is a pastiche of Agatha Christie's Poirot novels, featuring quirky detective Atticus Pünd as he solves a murder in a sleepy English countryside village where nothing is as it seems.

But as Susan nears the end of the book, she finds that the final chapter is missing and Conway himself has died under mysterious circumstances. However, she has reason to believe that he himself may have been murdered and sets out to discover Whodunnit. Along the way, she begins to realize that the characters in Conway's novel are heavily based on people he knew in real life, especially those who may have wanted him dead...

As a hybrid of classic detective fiction and modern-day murder mysteries, it is especially Troperiffic, and plays with or subverts innumerable tropes found in each type of mystery.

A sequel, Moonflower Murders, using a similar metafictional approach, was published in 2020. As part of the sequel's marketing campaign for Australia's Dymocks bookstore chain, Horowitz wrote an exclusive short story, Dinner for Eight, Dessert for Seven, beginning with a foreword in which real-life authour Sophie Hannah note  writer of the official 'missing' Poirot novels, commissioned by the Christie estate takes Conway to task for saying he's out of ideas, saying that you can find ideas anywhere. In response, Conway writes this short story which turns out to be a blatant rip-off of Hamlet. Horowitz has said that one more novel in the series is planned.

In 2022, Magpie Murders was made into a series, starring Lesley Manville as Susan Ryeland, Conleth Hill as Alan Conway, and Tim McMullan as Atticus Pünd.