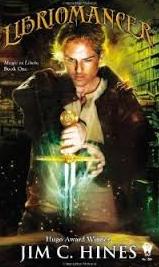 Why did you ever let him have a book?
"Libriomancy was in many ways a lazy man’s magic. There were no wands, no fancy spells, no ancient incantations. No hand-waving or runes. Nothing but the words on the page, the collective belief of the readers, and the libriomancer’s love of the story."
Advertisement:

Isaac Vainio is a Libriomancer, someone who can use magic to pull objects out of books. Or rather, he was, because after his magic went out of control during a particularly nasty case of fieldwork, he has been forbidden from using magic at all. Most of those with this talent work for Die Zwelf Portenære, commonly known as The Porters, an organization founded by Johannes Gutenberg. You see, when he invented the printing press, he did it to promote Libriomancy, because now people could read the same book in the exact same format. The first thing the guy did with it was use The Bible, pull out the Holy Grail, make himself immortal with it and then lock the book's magic so that nobody else could do the same. Only now he's gone missing, is apparently mind-raping Vampires and is using them to torture Porters and Vampires to death. Thanks to that, the Vampires have declared war on the Porters. Isaac only finds out about this when some Sanguinarii Meyerii, commonly known as Sparklers, come to kill him. He only survives because his crush-of-sorts, the Dryad Lena Greenwood comes to his aid and tells him that Nidhi Shah, his therapist and the person Lena was supposed to be bodyguarding has been kidnapped. Now it is up to Isaac, Lena and Isaac's pet fire spider Smudge to save the world from an all-out magical war, save Nidhi Shah before she is killed or turned and to find out just what the hell Gutenberg is up to.

The "Holy Shit!" Quotient only goes up from there.