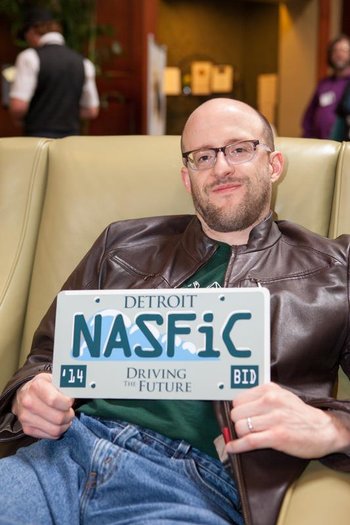 Jim C. Hines, writer of the The Goblin Quest Series (or Jig the Goblin) trilogy, which is basically (well, starts out as) a flip perspective version of your average dungeon crawl, and along the way it involves accidental heroism, people pretending to be stupid in order to survive, forgotten gods, whiny princes getting their arses kicked, braincontrolling fairies, snooty elves, a lost lonely girl getting her wish, a dragon getting offed, a cook wielding a spoon, a war with an army of goblins and orcs and suchlike that got mobilized by "if you follow me, you won't have to be afraid of humans again" and the smarter of the royal siblings getting succesion rights, awesome scenery and cute little firespider pets.

He also wrote something called The Princess Series, which are about what happens if you get the princesses from the non-family-friendly version of a fairytale fix their own problems, action girl style. It is rather awesome.

He also wrote Magic Ex Libris, featuring a librarian who uses a form of magic invented by Johannes Gutenberg (yes, the printing press guy) that lets him pull stuff out of books. Features a heavyset dryad, laser guns, and opens with a fight against a trio of sparklers, a species of vampire.

Also, a foray into science fiction called Janitors of the Postapocalypse. The Krakau came to Earth to offer humans a place in their growing multispecies alliance, only to find that humanity had been hit with a plague that killed half the population and turned the rest into shambling monsters. Their first impulse was to leave. Their second was to fix things. A hundred years later, cured humans are the backbone of the Krakau Alliance's military might, serving as shock troops or doing all the difficult, dirty jobs that keep a spaceship liveable.

Works by Jim C. Hines with their own pages on this wiki include: