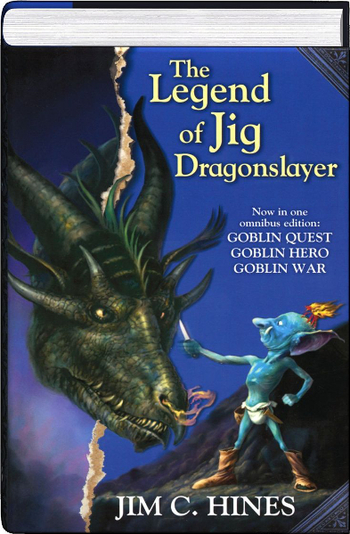 The Mighty Omnibus
"We may be outnumbered. They may have magic and muscle on their side. But we're goblins! We're tough, we're mean, and we're more than a match for a few so-called heroes. Some of us will die, but for the survivors this will be a victory to live forever in goblin memories."
— Goblin captain(name unknown), shortly before his death by multiple stab wounds to the back.
Advertisement:

The Goblin Quest series by Jim C. Hines is a humorous fantasy series about oh so very Reluctant Hero Jig, a clever little runt of a goblin who gets pulled into grand adventures and harrowing dangers when he'd rather run and hide as any self-respecting goblin should. Jig lives with a tribe of goblins in a mountain filled with bigger(and somewhat smarter) hobgoblins and various other dangerous creatures. Jig is picked on by the other goblins because of his size but what he lacks in imposing physical traits he more than makes up for with common sense. The series also features the original appearances of Smudge the fire spider from Jim C. Hines' "Magic Ex Libris" series.