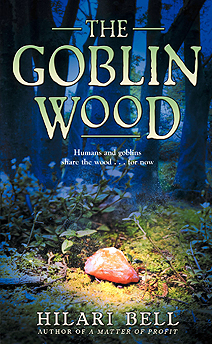 Sorry gobbos, the humans are evicting you from the woods.
Advertisement:

The Goblin Wood is a 2003 teen medieval fantasy novel by Hilari Bell.

Makenna is a young lady whose mother is killed for witchcraft on the order of the newly arrived priest of the Hierarchy, which does not want any magic to exist outside of its control. Her death is just one in a series of religious pogroms against witches, goblins, and social pariahs. Makenna doesn't take it well, so she floods her village by opening the floodgate on a dam and runs away. She encounters and spares the life of a goblin named Cogswhallop, and soon finds herself waging a guerilla war to keep goblins across the Realm from being slaughtered. The girl and her goblin friend lead the surviving goblins into the northern wilds beyond a mysterious wall that stretches across a thin isthmus to escape human persecution.

Meanwhile, the Hierarchy is putting a young knight, Tobin, through a gruesome trial for unwittingly aiding his rebellious brother. As a penance quest given to him by a mysterious priest, he goes north in search of a vile sorceress who has been gathering a goblin army, harrying humans and preventing the settlement of the north, which is part of a vast evacuation plan for the Realm to escape from the encroaching southern barbarians. The sorceress captures Tobin, and it turns out to be Makenna, who for all her affinity with goblins lacks the magical power the Hierarchy believes she must have to control so many goblins. Makenna actually commands them with a combination of buttons and The Power of Friendship. When Tobin sees that she's not an evil sorceress, and she sees that Tobin isn't a Knight Templar, they both have to deal with their misconceptions of each other while both the humans and the goblins face imminent extinction.

The Goblin Wood is the first book in a trilogy; its sequels, The Goblin Gate and The Goblin War were published in 2010 and 2011, respectively. The Goblin Gate focuses mostly on Jeriah, Tobin's brother, trying to save Tobin and uncovering a dangerous web of political intrigue in the process; The Goblin War deals with the long-foretold war against the cannibalistic barbarians of the South.

Tropes present in this book include: