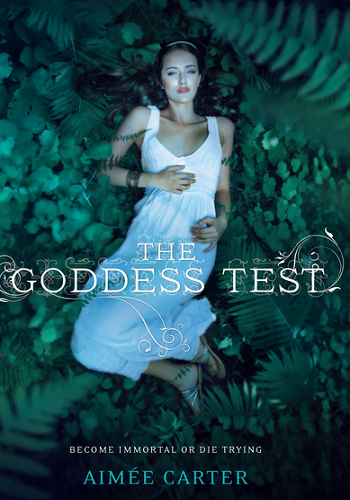 The Goddess Test is a 2011 Young Adult novel written by Aimee Carter.
Advertisement:

It's always been just Kate and her mom, and her mother is dying. Her last wish? To move back to her childhood home. So Kate's going to start at a new school with no friends, no other family and the fear her mother won't live past the fall.

Then she meets Henry. Dark. Tortured. And mesmerising. He claims to be Hades, god of the Underworld—and if she accepts his bargain, he'll keep her mother alive while Kate tries to pass seven tests.

Kate is sure he's crazy—until she sees him bring a girl back from the dead. Now saving her mother seems crazily possible. If she succeeds, she'll become Henry's future bride, and a goddess.

Has a sequel entitled Goddess Interrupted, with a third book scheduled for release. There are also several novellas.

The Goddess Test contains examples of: