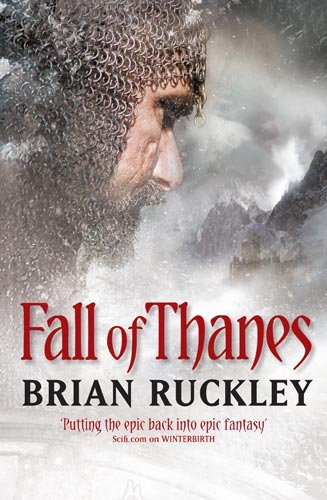 The Godless World is a fantasy trilogy written by Scottish author Brian Ruckley. It consists of: Winterbirth, Bloodheir and Fall of Thanes.

The titular world was abandoned by its gods long ago, after the Huanin (humans) and Kyrinin (elves, but notably different) rose up to destroy the Whreinin (wolf people).

The books start over 1000 years after the departure of the gods, following a war between the True Bloods and the Bloods of the Black Road, a group of religious extremists who believe one god remained, and the believers of this creed will be granted an afterlife, but only when everyone alive in the world is a true believer. Cue slaughter.

The books mainly follow Orisian nan Lannis-Haig, the son of the Lannis Thane's brother, although it commonly switches viewpoints to several others, including Orisian's sister Anyara, the Horin-Gyre Bloodheir Kanin, and Aeglyss, the Half-Human Hybrid who takes a spotlight in the second and third books.