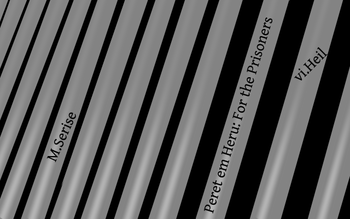 Peret em Heru: For the Prisoners is a Survival Horror RPG set in Egypt in 1998, the same year it was released. The story follows Ayuto Asaki, a recent high school graduate who's visiting Egypt with three of his friends when their tour group crosses paths with Professor Tetsuya Tsuchida and his assistant, Dr. Koji Kuroe. The archaeologist has just made an incredible discovery — hidden beneath the Great Pyramid of Giza is a sprawling underground ruin, and he offers their tour group the chance of a lifetime, to explore the depths alongside them.
Advertisement:

However, what the professor doesn't see fit to mention is that he's only recruiting them out of necessity. Or what he sees as necessity. For the ruins are heavily booby-trapped, and his presence there isn't strictly approved by the WHC or SCA. Unwilling to risk waiting for the rest of his team, he brings Ayuto and the rest of the tour group into the fold as unwitting meat shields. And as they venture through the ruins, they find that they may not be the only ones there...

The game was made in RPG Maker Dante 98 II, and won a game-making contest held by the Japanese group ASCII. In 2014, a Fan Translation was released by Memories of Fear

A remake was announced