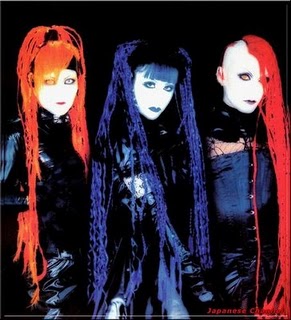 Yu~ki, Mana, Közi: The three consistent members circa 2000.
"We can say there is a genre called Malice Mizer, can't we?"
-Lucifer Luscious Violenoue
Advertisement:

For a band that were active for just nine years, Visual Kei outfit Malice Mizer endured a rather turbulent existence. Founded in the summer of 1992 by guitarists Mana and Közi, they languished in relative obscurity until 1995 when recently-departed frontman Tetsu was replaced by a little-known singer named Gackt. Their breakthrough album Voyage ~Sans Retour~ followed in 1996, released through Mana's own Midi:Nette label, and landed them a deal with major label Nippon Columbia. Their 1998 release Merveilles peaked at #2 on the Oricon Albums chart, spawned a run of hit singles, and a sold-out national tour, including a two-night run at the legendary Budokan arena. Alas, what looked to be the fairytale beginning to a long (and lucrative) career wasn't to last. On January 1st, 1999, Gackt announced his departure from the band. This forced the group to leave the Nippon Columbia label, but there was worse still to come, with the sudden death of long-time drummer Kami from a brain hemorrhage in June that year. He would never be officially replaced.

Reduced to just two guitarists and a bassist, the band went quiet until the new millennium with the release of EP Shinwa, featuring songs written solely by the late Kami. Then, still lacking a singer or drummer, production began on the band's fourth (and to date, last) album Bara no Seidou. For the subsequent tour, the band recruited session vocalist Klaha as their new official frontman, and he took on lyricist duties for the four non-album singles that would be Malice Mizer's last original releases before the announcement of the band's indefinite hiatus in late 2001.

Perhaps unsurprisingly for a Visual Kei band, Malice Mizer were just as famous for their elaborate costumes and onstage theatrics as their musical output, and encompased a vast array of different looks throughout their career. The general styles of these costumes can be roughly divided by singers' tenures. Early on, the band embraced the VK penchant for Androgyny (or full-on crossdressing in Mana's case), before shifting, with the arrival of Gackt, to a look inspired by 1700s-Europe period dress. Then, following the annus horribilis of 1999, their look took a turn for the seriously gothic, whilst retaining some of the historical elements of the Gackt-era outfits.

The band's musical style followed much the same pattern. Originally a Dark Wave band, they lost all sense of genre with Voyage ~sans retour~ and Merveilles, liberally mixing their Darkwave sound with elements of pop, electronica, classical, and industrial metal. Things stabilized somewhat with Bara no Seidou, but remained eclectic, mixing heavily distorted guitars and vocals with female sopranos and extended organ and harpischord solos.

Despite their 'indefinite hiatus' leaving the door open for an eventual reunion, there has been no official mention of this possibility, and had seemed increasingly unlikely with the success of Mana's band Moi dix Mois and Közi's various solo projects, plus both Yu~ki's and Klaha's apparent retirement from music. However, with the recent involvement of Yu~ki with both Moi dix Mois and Közi's band ZIZ, hope springs eternal.

They reunited at last, for a one-off concert in September 2018, in honor of the band’s 25th anniversary. Only time will tell if they will do anything beyond that...