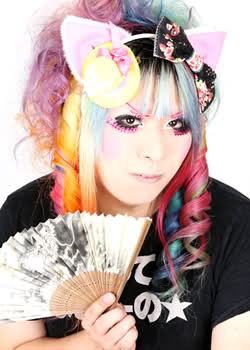 NOT to be confused with Marcia Cross from Melrose Place and Desperate Housewives. Though that would be quite interesting...

Maria Cross is a solo Visual Kei singer allegedly of the Oshare Kei style, known best for street performances in Tokyo that are closer to the extremes of noise music, grindcore, and noisegrind. Is Maria a Stealth Parody of Visual Kei or just Giftedly Bad? No one really knows, although they have attained legendary status in some corners of Visual Kei for being either or both. That said, Maria Cross is something that, for the true visual kei fan, cannot be described, but simply must be experienced. In this experience, one may find some form of absolute zen understanding... or simply wonder why the Dreadful Musician page cannot have just one real-life example.

You Have Been Warned!
http://youtu.be/gm9XLm9S7FE

Tropes that apply to Maria Cross: