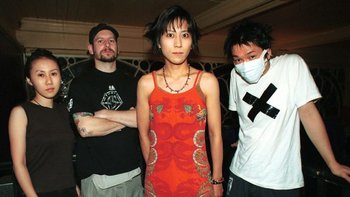 Melt Banana (stylized as MxBx and Melt-Banana) is a Japanese experimental rock band formed in 1991. Easily recognizable by their extremely fast and energetic Grindcore music combined with elements of Nu Metal, Alternative Rock, Electronic Music (especially Harsh Noise and Industrial), Punk Rock, dance music and Japanese Pop Music in a similar manner to bands such as Mr. Bungle and Faith No More, the distinctive musical chemistry between frontwoman/founder Yasuko Onuki and lead guitarist/co-founder Ichirou Agata, and their dual persona as a band (Melt Banana Lite and Melt Banana Regular), they are one of the most prominent and prolific Japanese rock bands in the active scene.

Originally a musical project by Yasuko Onuki called "Mizu", the band began to come together with the arrival of Ichirou Agata and bassist Rika Hamamoto in 1991. In 1992 the project was renamed "Melt Banana". In 1993, the band opened for KK Null, frontman of Japanese metal band Zeni Geva, who was impressed enough to sign them to his label, and introduce them to Mark Fischer of Skin Graft Records. However, the band has not had an official drummer, ever since their first drummer left shortly after their conception as Mizu. As of 2018, the band also lacks a bassist, with Rika Hamamoto quitting in 2013.

Since their formation, they have released eleven studio albums and 23 extended plays (mostly split albums with other bands). They have toured with Mr. Bungle, Melvins, tool and Fantomas, have worked with acclaimed grindcore band Discordance Axis (their drummer Dave Witte has worked with them!) and legendary experimental musicians Mike Patton and Merzbow.