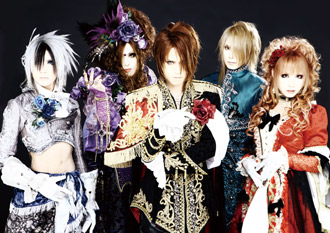 Versailles in 2007. From left to right: Teru, Jasmine You, Kamijo, Yuki, Hizaki
Advertisement:

Versailles is a Japanese Symphonic Power Metal band, formed in 2007 by vocalist Kamijo and guitarist Hizaki, both of whom were already established musicians at the time. Alongside second guitarist Teru, bassist Jasmine You (formerly known as just Yuu), and drummer Yuki, they have enjoyed a fast-paced career. First self-produced on Kamijo's personal label, Sherow Artist Society, they were signed to Warner Music Japan in mid-2009.

As part of the Visual Kei movement, Versailles makes use of elaborate costumes and stage performances as well as androgynous aesthetics. Their particular theme is a mix of French aristocracy, which they use for their stage dress, and vampire mythos, which influences the band's backstory. The backstory in question is fairly elaborate; the idea is that the band are the "Descendants of the Rose," a group cursed with immortality. Each member plays their own role, and many of their songs and music videos tell part of the story. The band takes extreme care with both their visuals and their music, and have stated on numerous occasions that they hope to become known all over the world. Kamijo has also criticised the VK scene in general, saying that too many bands put too little emphasis on the music when they should be paying both factors equal attention.

Versailles are unusual in the Japanese scene, as, within two years of the band's formation, they had already toured Europe and visited the US once. They also released their first album on iTunes so that overseas fans could buy their music easily. Gathering fans abroad is important to them, so they have done all they can to make their work accessible. Unfortunately, they ran into a hitch in the States when a solo artist also using the name Versailles attempted to sue them for plagiarism. They got around this by changing their name to Versailles Philharmonic Quintet for their future USA releases. 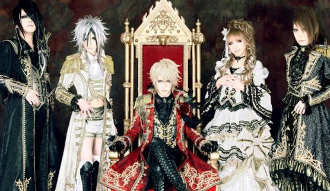 The band went major in 2009, signing on with Warner Music Japan, and began to plan their second album and world tour. However, tragedy struck when, on August 9, 2009, bassist Jasmine You died suddenly and unexpectedly of an illness, the exact nature of which has not been made public. The album and tour were postponed and all live performances were cancelled. Versailles did not return to the music scene until October, when they played at the Visual Kei festival Vrock, with Matenrou Opera's bassist Yo standing in for Jasmine.

On September 4, 2010, they announced that Masashi was now a permanent member of the band after serving as the support bassist on their world tour; Jasmine You has been made an eternal member.

In early 2011, Versailles starred in Onegai Konaete Versailles (Please Fulfill My Wish, Versailles!), a variety TV Mini Series which can best be described as "Versailles solves mundane problems with the power of Visual Kei." They provided the theme songs for the films Vampire Stories: Brothers ("MASQUERADE") and Vampire Stories: Chasers ("Vampire"); Kamijo also produced the soundtrack for the latter.

On July 20, 2012, the band members announced that they would be going on an indefinite hiatus at the end of the year, releasing a Self-Titled Album in September and doing a brief farewell tour in Japan before their final performance on December 20. The next year, Versailles' instrumentalists formed Jupiter, a new band with a different vocalist, while Kamijo began to release music as a solo artist. In 2015, the band announced a reunion in mid-2016.

Not to be confused with The Rose of Versailles nor the French-Canadian series Versailles.

Versailles and its members provides examples of: