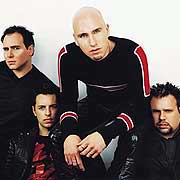 Vertical Horizon is an American adult alternative band, initially formed by Matthew Scannell and Keith Kane in 1991 while they were students at Georgetown University in Washington, D.C., and later joined at various periods by several members in different roles. The band is best known for its singles "You're A God," "Everything You Want," and "Best I Ever Had," all on its 1999 Everything You Want album.
Advertisement:

The band has its own webpage, which can be found here