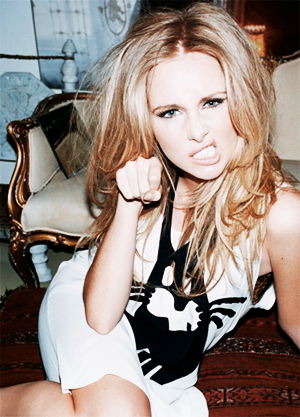 Have a nibble, pigeons.
Advertisement:

Diana Vickers (born 30 July 1991) is an English singer and stage actress who came into public attention after finishing fourth in the 2008 series of British talent show The X Factor. In January 2009, Vickers signed a record deal with RCA Records, and released her debut album Songs from the Tainted Cherry Tree with them in May 2010. She later parted ways with them in 2011 due to "creative reasons". In 2013, she signed with So Recordings and announced the planned release of her long-delayed sophomore album, titled Music to Make Boys Cry.