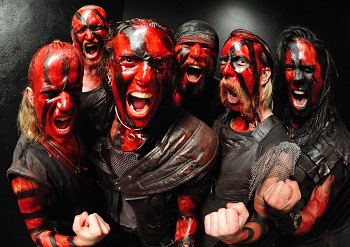 From left to right: Olli Vänskä, Jaakko Jakku, Mathias Nygård, Robert Engstrand, Jussi Wickström, Jesper Anastasiadis
''The heart of Turisas was forged by four winds
In a smithy high up in the skies
On an anvil honour, with a hammer of blood
The Four Winds pounded''
-"Battle Metal"
Advertisement:

Turisas is a battle/folk/viking metal band from Hämeenlinna, Finland, formed in 1997. Their name comes from Iku-Turso, an ancient god of war in the Finnish mythology. Their debut album Battle Metal pretty much named and kick-started an entire subgenre of Heavy Metal.