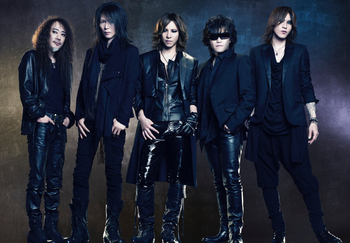 X Japan is a Japanese rock band founded in 1982 by schoolmates Yoshiki Hayashi and Toshimitsu 'Toshi' Deyama. In the earlier years of their career they mostly played a hybrid of Thrash Metal, Hair Metal and Power Metal alongside some ballads, but in later years they shifted to a more progressive/experimental sound. They were not the first Visual Kei band, but they were certainly one of the movement's pioneers, and it is widely claimed that it was bandleader Yoshiki who is the Trope Namer for Visual Kei. X Japan are notable for becoming one of the first Japanese acts to gain notable success whilst being on an independent label, as well as the gravity-defying hair they sported in their earlier years (although in the early 90's the band began to wind down it's visual look, and by the time of the split in 1997, only hide's shocking pink hair remained.)

The band's membership has remained fairly consistent throughout, although in the very early days when X Japan, then just X, were touring locally, there was a spurt of support members. When the band reached the spotlight in the late 1980's, they had settled on a consistent lineup, and got through the next decade or so with only one change- bassist Taiji was replaced with Heath. Unusually, the bandleader was not a singer or guitarist, but pianist and drummer Yoshiki, who wrote most of the music and lyrics, and who had more or less total creative control over X Japan's direction. In the 80s, they were also the first Visual Kei band to appear in an American film (and may still be the only one to have done so): they appeared in a short scene in Tokyo Pop.

By the mid to late 1990's, X Japan had garnered huge popularity, and were filling enormous venues, but in 1997 they decided to split. The band members were more interested in their solo careers with hide's solo career becoming more popular, and when Toshi denounced the band and left because it was against his religion at the time, the other members chose to disband rather than replace him. Whatever had gone on, it was clear that there had been conflict somewhere along the line, because during the band's last live performance together, Yoshiki hugged Toshi, then later revealed that the hug had originally meant to be a punch.

After the split, the band went off in different directions. Toshi turned to performing 'healing music' on behalf of Home of Heart, Yoshiki set up a new project Violet UK, hide continued work with his solo band and became a founding member of the American band Zilch, and Pata and Heath, after a decent sized hiatus, developed some solo work. Yoshiki and hide were making plans to reunite the band in 2000 with hide as the lead vocalist instead of Toshi. However, in 1998, disaster struck - hide was found having allegedly committed suicide. An ambulance was called, but it was too late, and hide died on the way to the hospital.

Despite this tragedy, in 2007 a reunion was announced, with several support guitarists, and eventually ex Luna Sea guitarist Sugizo taking over from hide. Three new songs were penned for X Japan, one of which, 'IV', was used for the end credits of the 'Saw IV' film. The other two are a vocal version of 'Without You' and a rock song called 'Jade,' which Yoshiki credited to hide's inspiration. A world tour was announced for 2008 and 2009, although it was later canceled due to a worsening of Yoshiki's neck injury that demanded emergency surgery. Updates in August 2009 suggested an album will be released by the end of 2009, then updates in 2010 suggested then... though due to other happenings that production date has been moved to spring 2011... then to spring 2012... then to who knows when, though it is 98% Complete!

Vocalist Toshi developed intercostal neuralgia around November 2009 and was unable to sing or tour as a result until 2010. Later, it would be known that this was due to his life situation's stress at the time. Meanwhile, Yoshiki's recovery and rehabilitation from his neck surgery continued and continues. The band's projects including the new album and any tours, therefore, were on hiatus until their promotional video shoot in Hollywood January 9th 2010, which was held on top of the Hollywood and Highland mall and open to the public.

Toshi announced in a subsequent press conference that he had left his religion, and accused its leader and his ex-wife of taking all his income for over 12 years, filing fraudulent tax returns and taking out loans in his name without his knowledge. For a while, Masaya still owned many of Toshi's official properties and necessitated that Toshi change his stage name to Tosh1 as well as not have his own online sites for around a year until the legal matters were settled.

In 2010, the band played Toshi's, ahem, Tosh1's, "solo sayonara" show to raise money for him in Tokyo on February 24th, and recorded a new video since then as well as making several public appearances. X Japan played a set at the 2010 Lollapalooza music festival in Chicago, and has also played an outdoor 2-day live at Yokohama's Nissan Stadium in Japan. Taiji Sawada rejoined the band then as a second bassist, but played no further gigs with them despite plans to do so...

The band began a successful North American tour on September 25, 2010, playing in Los Angeles on that night, then going to Oakland, Seattle, Vancouver BC, Chicago, Toronto, and New York City. Almost all venues were sold out. Later, it would be revealed that Yoshiki had been in incredibly poor health for most of the tour and it was "miraculous" that he managed to play all of the scheduled gigs.

On July 17, 2011, Taiji Sawada, the former bassist who reunited with them for the Yokohama 2010 gigs, allegedly committed suicide in Saipan in the CNMI. Except he may have not committed suicide, but could have been a murder victim, and no one really knows except for him and whoever else was directly involved.

The band is still working on the album projected for an unknown date, allegedly. They completed a successful world tour in 2011, including gigs in South Korea, China, and Thailand. They are also very active in charity work related to the Tohoku Earthquake and Tsunami and the Thailand floods of 2011, auctioning off goods, donating large sums of money, and occasionally doing relief work themselves.

The band has won the Best International Band award via fan vote in 2012 at the Revolver Magazine Golden Gods Awards, defeating Rammstein, Lacuna Coil, Meshuggah, Behemoth, and Sepultura in the vote. Yoshiki Hayashi has become the composer of note for the 2012 and 2013 Golden Globes, which is more detailed on his page.

A new Greatest Hits Album was released as of 2014 called X Japan - The World, while they announced a new stylistic look. They would later hold a concert in October 2014 at Madison Square Garden in New York - the very venue they had tried to introduce themselves to the Western world at back in The '90s.

In 2015, the band announced their new album in twenty years, as well as a documentary about the band, slated for a March 2016 release and to be premiered at the Wembley Arena in London. Instead, it was premiered at the Sundance film festival in January 2016, and will premiere globally on October 21, 2016.

The Wembley Arena show slated for 2016 was canceled and moved to 2017, due to Pata's suffering life-threatening complications of alcoholism (liver and gastrointestinal damage including portal thrombosis and diverticulitis). The album was also delayed once more, with a release date pending. The band is once again active as of 2016 with Pata's successful recovery, planning three shows slated for the Visual Japan Summit (a three-day visual kei festival in Japan), as well as a series of solo events for Yoshiki.

Not a member but deserves major honorary mention

We Are X - 2016, debuted at the Sundance Film Festival. A promotional piece/ documentary about the band which focuses on Yoshiki and glosses over some of the past issues and the like, but which seems to have been somewhat well received both among fans and non-fans who saw it.

A full list of the bands signed by Yoshiki and hide during the days of Extasy Records as an indies label can be found at Extasy Records. It used to be listed in this article, but due to the creation of that article and the formatting issues it presents here as a floatbox, it's been moved.