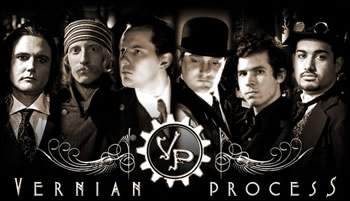 Members of Vernian Process, circa 2010
Stained glass memories of a broken dream
A time for progress, a time of steam
Chimneys billowing across the sky
A time of conquest, a time to die.
— "Vagues De Vapeur"
Advertisement:

Vernian Process and their works contain examples of: