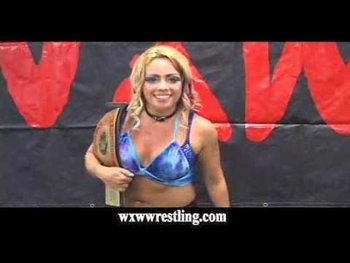 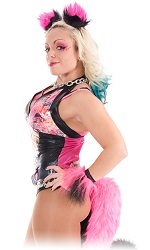 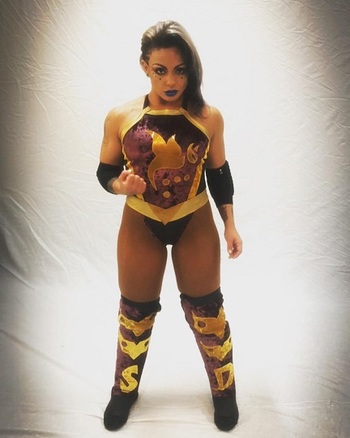 She's coming for your legs
Advertisement:

Christina Garibaldi (born February 19, 1987) is an American cosmetologist and vet tech turned Professional Wrestler and trainer, from The Bronx, NY. She has in turn gotten training from Bobcat, Al Snow, Rip Rogers, Nick Dinsmore and Lexie Fyfe, among many others.

Sh best known in professional wrestling by the ring name Solo Darling. Aside from the times when she went by "Christie Belle" and claimed to be an illegitimate daughter of Tracy Smothers, or when she adopted Daffney Unger's old "Shark Girl" mask, the ring name has stuck, but the image and persona associated with Darling have still varied wildly. Depending on who one asks, Darling can be described as an evil hedonist, a clawing cat, a vain would be fitness model, a pandering squirrel, a superhero, a straight laced submission specialist...or a bee.

As partially evident by the pictures, she is a former WXW (Wild Samoan Afa's promotion) Women's Champion, a Ring Warriors Battling Bombshells Tag Team Champion with Brittney Savage, a Feast Champion of Beyond Wrestling, and a former CHIKARA Campeon de Parejas

, first with Travis Huckabee as The Rumblebees, then with Willow Nightingale as The Bird and The Bee.

"She's coming for your tropes":