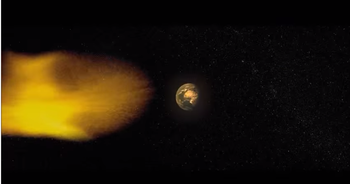 According to The Other Wiki, a solar flare is a flash of brightness on the sun's surface that causes a sudden release of energy. In Real Life, these are quite common, and (generally) only pose a hazard to astronauts in space. While some potential dangers exist from solar flares on Earth, for the most part, they haven't caused any serious trouble in recent times.note And most of it tends to be interfering with satellites already in orbit and other sensitive electronics. Otherwise-'ooh, look at the pretty lights! (Aurora Australis/Borealis)'

In fiction, an easy way to cause some sort of disaster is to have a solar flare kickstart the problem. The flare is usually shown as a layer of the sun itself coming off of it and frying anything unfortunate enough to be caught in its path.note Which by then would be slightly more accurate to describe it as a coronal mass ejection. In other works, perhaps the flare causes magnetic poles of a planet to flip, which causes all sorts of trouble, either by causing it to become geologically unstable, or ruining every electronic device. In other works, some power coming from the flare causes the dead to rise/machines to come alive/everyone to hang the toilet paper under the roll.

Of course, Space Is Big and Earth is a very small target. To cause The End of the World as We Know It in real life, a coronal mass ejection would not only have to be traveling in the right direction, but also have the correct vertical orientation relative to Earth's magnetic field in order to be channeled by it rather than blocked. However, the Anthropic Principle naturally dictates that these requirements are met for this form of the trope to take place.

Compare Lightning Can Do Anything, which is another trope of a naturally occurring event causing wonky things to happen. Compare with Star Killing, a larger example where the star is destroyed intentionally to cause disasters.