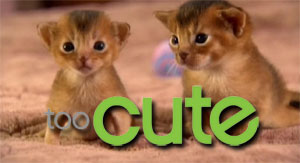 All together now... Aaaaaaaaaw!
Welcome to a world where cuddly knows no bounds,
a place where precious is redefined.
Witness the miracle of cute.
From their first triumphant calls to the wild
to their adventures with new friends,
it's three different [baby animal] coming of age stories...
...and they're awe-inspiringly adorable.
Because these animals are just too lovable,
too curious, note "determined" in the Puppies episodes
Advertisement:
Too Cute.

An Animal Planet series focused on baby animals in all their cuteness. Most episodes feature three litters of either Cute Kittens or Precious Puppies for the first ten to twelve weeks of their lives, showcasing various milestones while being as adorable as possible.

After three years of cuteness, the show received a Spin-Off called Too Cute! Pint-Sized in 2014.

The first season of the show was originally on Netflix, but was eventually taken down. Season 4 can now be found on Hulu if you subbed to Hulu Plus.