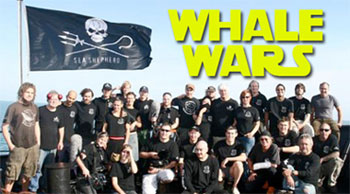 "The world is a vampire..."
Advertisement:

Ever wonder what would happen if a Real Life Animal Wrongs Group got their own show? Well, that's pretty much what Whale Wars is about. The show, which aired on Animal Planet from 2008 to 2015, follows Sea Shepherd Conservation Society as they try to stop Japanese whaling ships from hunting whales. They do this by chasing the ships, and then disabling or throwing rotten butter at them; note that in this case, "disabling" means attempting to sink or scuttle the ships, in the middle of the Antarctic ocean, which could certainly result in casualties. Because of this, the show is highly controversial.

In case you are wondering, the whales do not actually war with each other.

This article is not about whaling. It is about a TV show and the tropes it employs. Editorials on one side or the other of the whaling controversy are not useful here.