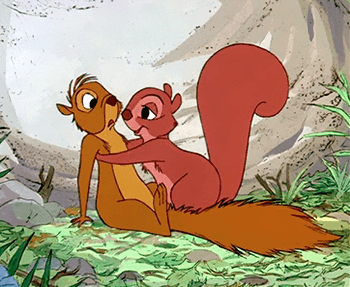 Male animals, on the other hand, appear "scruffy," messy or at least less well groomed. Sometimes, it is or is almost as though they don't put much thought into their appearance, but sometimes, they are just naturally disheveled from doing stuff that girls don't stereotypically do.

Some male animals may have fur or feathers that stubbornly refuse to stay neat or stick out.

If the male animal is a male dog, the scruffy appearance could just be due to the wire-haired coat texture.

This trope shows up in animal characters based on wild animals as well as domestic animals.