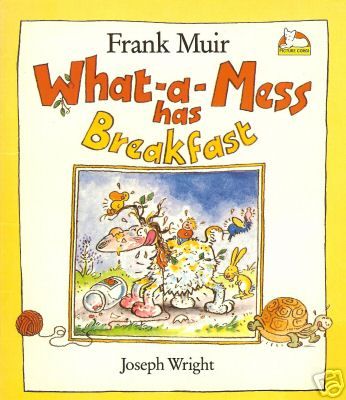 He's an Afghan Hound, but it's not apparent through all the mess
What-a-Mess is a series of children's books written by English comedy writer and BBC radio personality Frank Muir. It was thrice adapted for animation: once by Smallfilms in 1979, again as a BBC miniseries by Bevanfield Films which pulled stories directly from the books and again as a Saturday Morning Cartoon by DiC Entertainment which aired on ABC Kids in the United States in 1995.
Advertisement:

The titular What-A-Mess (real name Prince Amir of Kinjan) is a mischievous but good-hearted Afghan Hound puppy whose naïveté and pride often get him into messy situations. Other characters include his beleaguered human family, the snooty Cat Next Door and a bird who nests in his hair.

The show, in particular, had a pretty catchy opening song