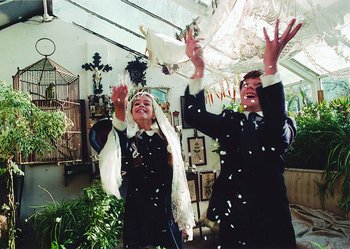 David: You see, I promised I'd never leave her.
Mum: You might marry her some day.
David: I've already married her.
Advertisement:

This trope represents a wedding-like moment that however is not an official wedding.

It can be a very intimate moment shared only between the lovers themselves. There's no one to officiate, no one to witness, and it most definitely isn't recognised by authorities, however, it is very meaningful to the lovers themselves. Their mutual promise is binding. Or the lovers can celebrate their commitment with a grand ceremony with guests, vows, reception, gifts, the whole shebang. The only thing is that the wedding is not really real and has no legal status, however, it's incredibly meaningful to the happy couple and it's also a very important moment for their family and friends. Alternatively, the lovers decide to throw a small impromptu wedding for fun among friends. Someone from the group will volunteer to "officiate" while others will jump in and be happy to play the maid of honour or the best man, basically the whole wedding party. However, it's only symbolic as they are not registered for marriage license, nor is the officiating person allowed to perform the ceremony.

This trope can come about in various ways:

Whatever is the reason, it will not stand in the way of true love. The lovers want to be together for good no matter what. So they decide to have their metaphorical wedding and after that, they consider themselves as good as married.

The big grand ceremony is often the case of gay couples who want to have a wedding like straight people and the work happens to be set in the time where gay love is no longer persecuted, gay couples can be openly together, however, same-sex marriage is not (yet) a legal option.

Forbidden Love and its subtropes and related concepts may be the reason the lovers can't be together openly. Compare/contrast with My Own Private "I Do", which is a trope about intimate but legal weddings. See also Grand Romantic Gesture, They Do and Real Fake Wedding, and G-Rated Sex, where two characters share intimacy in a family-friendly work.

It's worth noting that in Real Life in some countries, the couple might be considered de facto married in some of these cases. It's usually referred to as Common Law Marriage.note  Also known as informal marriage, marriage by habit and repute or marriage in fact. A couple is legally considered married without them having formally registered their relation if the following requirements are met: they live together, both partners could freely consent to marriage, they must be of legal age or have parental consent, and neither can be currently married.