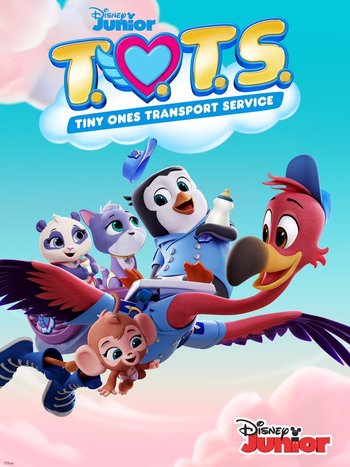 The series follows the adventures of best friends Pip (voiced by Jet Jurgensmeyer from Bubble Guppies), a tenacious penguin, and Freddy (voiced by Christian J. Simon from The Amazing World of Gumball and Sydney to the Max), a kind-hearted flamingo. As the only non-stork delivery birds at the titular company, the duo must take tender care of the animal babies that they're delivering, and make sure that they get to their families safely.

T.O.T.S. premiered June 14, 2019 on Disney Junior. It was renewed for a second season before the first season premiered. The show was also renewed for season 3 before season 2

came out. It will feature the TOTS Sky School, as well as a teacher named Mrs. Trunklebee.

On August 25, 2021, it was announced that the show will end after three seasons

Not to be confused with Tots TV.

This show transports these tiny tropes: