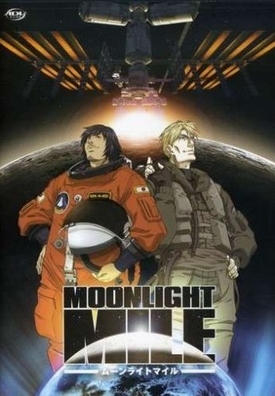 The distance between a hero and his destiny is only a moonlight mile.
Advertisement:

Based off a manga by Yasuo Otagaki, Moonlight Mile is about two mountain climbers Gorou Saruwatari and Lostman, who decide to become astronauts. Each takes a different route: Gorou becomes a construction worker to gain multiple operating licenses, whilst Lostman becomes a pilot for the US Navy.

Whilst NASA, Russia, Europe, Japan and a few other countries have integrated their space agencies, the second season sees a secret divison of the US seeking military buildup as well as a rival emerging in China, all building towards a new cold war in space.

The series takes a very realistic viewpoint on space travel, and yet manages to make the vehicles, robots and building designs impressive and distinctive.