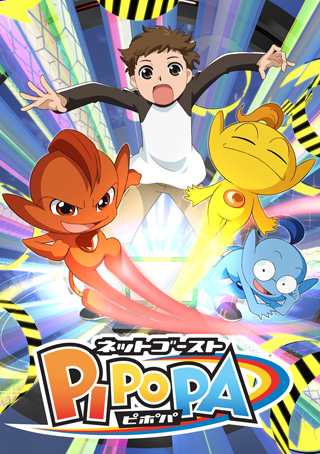 Yuta Akikawa is a boy with a fear of computers. That is too bad for him since this series starts with him moving to the technologically advanced Kamimai City and then suddenly being sucked into his mobile phone. There, he meets three "Net Ghosts"; Pit, Pot and Pat, who show him the "Net World" hidden within the internet. Together, they travel the Net World meeting other net ghosts and finding new adventures.

But it's not all fun and games. Within the technology company "Dream Future" are dark plans involving the mysterious Seiren project. And even when that plotline ends, Yuta and his friends suddenly find themselves having to save the net world on a regular basis.

Crunchyroll has released legal subs of all 51 episodes

under the title "Web Ghosts Pi Po Pa", along with a few other translation oddities. The last episode ends with a small Sequel Hook but whether it will lead to anything has not been announced yet.