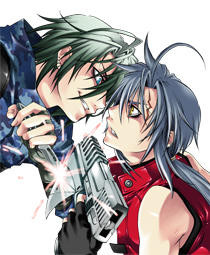 Ricalna and Turkes
"This fleeting golden age has ended, and has become nothing more than a dream. People have begun to search for the next dream. Peace... Searching for a steady life... and just a bit of happiness... For the sake of these things, people have begun to move. Despite this, the war continues."
Advertisement:

Mother Keeper is a shounen action drama manga with some sci-fi and slight comedy by Sorano Kaili, who was also the creator of Monochrome Factor. The manga was serialized in Blade Comics from around 2006 to 2014.

The manga takes place in and around the city of Eden, which is closed off from the rest of the world. Within Eden, it is a total paradise. However, Eden isn't big enough for everyone, and some people are forced to live in what is a near wasteland outside it. People in the slums of the outside are finding that Eden is making their lives worse and attempt to form resistance groups. Ricalna Forde is a member of one of the groups known as COSMOS and their goal is to take down Eden's central CPU which controls Eden.