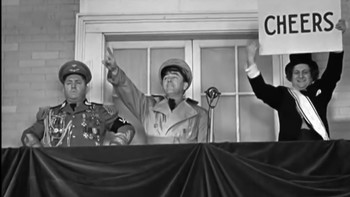 For Apathetic Citizens, the sign really helps.
"Instead of government, we had a stage
Instead of ideas, a prima donna’s rage
Instead of help, we were given a crowd
She didn’t say much but she said it loud!"
— Che, Evita, "Oh What a Circus"
Advertisement:

In order to both display a mastery over the crowd and to better project one’s voice, leaders often give speeches on some type of raised platform. A special favorite is a prominent balcony from a palace or mansion. In media, such speeches can be portrayed positively or negatively, depending on the speaker.

If it’s a popular monarch or head of state, then they are likely trying to encourage their people during a time of great danger or struggle or declaring victory after the Evil Overlord’s attempt at conquest was thwarted. If it’s an Action Politician, then it is especially likely that they are giving a Rousing Speech. If The Hero Dies bravely in battle, then this may also serve as a eulogy.

However, if the leader is demagogue, then expect this to be a case of Putting on the Reich with plenty of Hitler Cam shots. The crowds will be likely be whipped up into a frenzy, and if it’s a musical it may turn into an Angry Mob Song. In the case of villain victory, then this will likely be a New Era Speech. But if it’s a more established People's Republic of Tyranny, the crowd may look pathetic and disinterested and only give weak, obligatory cheers. In this case or in the case of a Near-Villain Victory, expect The Hero and his crew to stage a very appropriate interruption of the events.