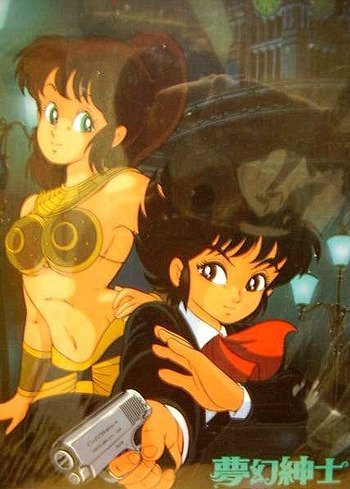 Mugen Shinshi (Dream Gentleman) is a mystery manga universe from The '80s, the main work of cult mangaka Yosuke Takahashi. It is composed of several, long-running alternate continuities, the second of them being by far the most popular and representative.
Advertisement:

Mamiya Mugen is not your typical young heir to a wealthy family of Imperial Japan. He's effectively a child genius who lends his help to the Japanese police to solve bizarre and seemingly impenetrable cases. His family has its own connection to crime, though, and quite of a convoluted history. But when Mamiya teams up with his faithful and vaguely vampiresque butler Alucard and his beautiful client-turned-assistant Atsuko Fukune, he's able to deal with all of it like a true dream gentleman.

Although the work never received a true anime adaptation, an OVA that combined the plots of several chapters was produced by Gallop in 1987.