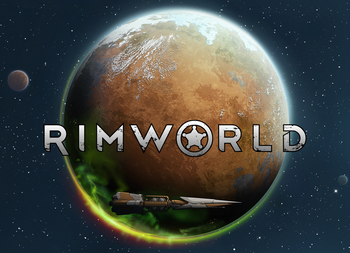 is a colony-building simulator developed by Ludeon Studios, inspired by games like Dwarf Fortress and Prison Architect, and science fiction settings like Dune and Firefly. The game officially left Early Access and entered full release in October 17, 2018.
Advertisement:

About three and a half thousand years in the future, humanity has spread itself across the galaxy, colonizing thousands of worlds and developing new technologies. One obstacle has proven to be insurmountable—the light barrier. Thus, each colonized planet has largely been left to its own devices; worlds develop at their own pace with limited contact between them. While small interstellar empires may occasionally form in highly-dense stellar regions such as star clusters or nearer to the galactic core, many of the isolated colonies bomb themselves back into the Stone Age, resulting in a wide technological gap. Some ascended to become super-advanced "transcendent worlds" that appear utterly alien, while others regressed to a pre-industrial state.

Your vessel was in orbit around one of these undeveloped planets before crashing in an unspecified accident. As none of you were enterprising colonists, your group is woefully unprepared for this primitive and potentially hostile world. Luckily, your Escape Pods are well-stocked with basic tools, weapons, and supplies, giving means to provide for yourselves. Rescue is unlikely, as it'll probably be years before anyone even knows you're gone, but perhaps you can find some way to get yourself back home—provided you survive, of course. There are also options to play as the tribal descendants of a Lost Colony who had survived from an attack from reactivated but malfunctioning robots, or a Bold Explorer who is on an adventure on a remote planet in search of fortune and glory. Or, you can make your own backstory.

The game's unique spin on the genre comes in the form of an "AI Storyteller" in addition to a standard set of difficulty levels—which allows the player to determine what sort of experience they want from their game: whether it be the more traditional progression of increasingly difficult challenges; a relaxed setting for base-building without the constant worry of having to defend against attackers; or a totally unpredictable sequence of events dictated by the whim of random chance.

An expansion, Royalty, was released on February 24, 2020. The expansion includes a new faction, The Empire seeking to settle in the planet and gather allies, in addition to royal titles, quests, and psychic powers.

A second expansion, Ideology, was released on July 20, 2021. It revolves around the introduction of intricate belief systems for individual colonists and your colony as a whole, as well as every other faction on the planet, giving additional depth to the game's story-telling. Additional features include unique leader roles for your pawns, a slavery system, a third method to win the game, and dryads, a special creature type that spawns from a mystical tree and can be bred and trained for a variety of tasks.