Dining in the Buff 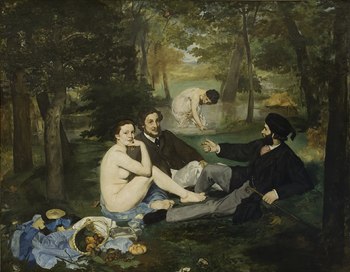 "I say, Martha, might you have forgotten something for our picnic? Where's the bloody potato salad!?"
"So she ate breakfast naked?"
— George Costanza, Seinfeld, "The Apology"
Advertisement:

When a character or characters decide(s) to nibble on something (or sometimes eat a whole meal) without bothering to put on clothes first. This can be done for any number of reasons. It might be because they are a nudist, they might be taking a bath at the same time or they might not have access to their clothes temporarily. Or they might be drinking something alcoholic and their awareness switch has been turned off by taking their clothes off.

This trope can overlap with Naked People Are Funny if it is meant as a gag or punchline.

Compare and contrast Naked Apron which is about cooking while naked but does not necessarily involve eating.

Caution: this should probably not be attempted in Real Life when consuming hot foods and beverages.

And please remember to adhere to TV Tropes' No Lewdness, No Prudishness policy when adding examples.