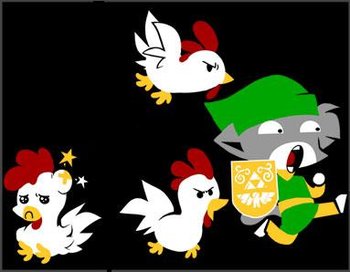 Attack the Cucco at your own peril...
"Cuccos will wander around the stage, minding their own business. If you're heartless enough to attack one, you deserve what you get."
— Super Smash Bros. Ultimate
Advertisement:

Some games let the player do things that are a bit... immoral. Some players are just fine with that and will gladly take advantage of it; after all, the video game is a consequence-free world, one where you can do things such as shotgun a crowd of innocent bystanders, torture mooks for information and kill them even when they tell you what you need to know, or be an all-around jerk. Honestly, the exact reason many people find these games fun is because they can do horrible things with no negative effects. At worst, you'll slide toward the evil end of the game's Karma Meter and the storyline will play out differently… or not.

At least, that's how it usually is. Sometimes, a game will allow you to be cruel, but will make sure that you get your comeuppance for doing so. Were you laughing gleefully while chaingunning your fellow soldiers? You probably won't be when the rest of them turn against you and fill you with bullets. Were you butchering unarmed scientists who were just doing their jobs? You may have been amused, but MI6 wasn't — mission failed. Did you stab that passing Innocent Bystander to death? Turns out he had critical information, and now you can't finish the game. Have you been carelessly marching your soldiers into certain doom? They're gone for good, and now you're badly outnumbered and outgunned by the enemy.

This also shows up in conjunction with Multiple Endings and Karma Meters with increasing frequency. These games may allow you the freedom to be the most despicable Villain Protagonist possible, but that choice can now have a direct impact on the game's story. Consequences for your actions often include increasingly-less-subtle What the Hell, Player? moments from party members and NPCs, a boss fight against a Hero Antagonist who proceeds to karmically tear you to shreds, and a bad ending that's rarely worth any of the above effort. And if you're really unlucky, as a last resort the game may just bust through the Fourth Wall entirely to mete out the real-life punishment of completely resetting your game progress.

This can also be used not for morality's sake, but as a way to keep a game from being Banned in China, leading to a mere 18+ rating in many cases.

Hostage Spirit Link is a specific form of this, though in that case it is generally used to prevent you from madly spraying fire every time you open a door rather than to punish you for being cruel.

The most common subtropes are probably I Fought the Law and the Law Won and Shoplift and Die, in which your comeuppance comes in the form of overpowered Non Player Characters intent on either locking you up or beating you down.

Contrast Mercy Rewarded and What the Hell, Player?, which are less overt methods of chastising a cruel player. The inverse, naturally, is Video Game Caring Potential.

By the way, there are LOTS of opportunities to get endings like this in this game.

By the way, there are LOTS of opportunities to get endings like this in this game.