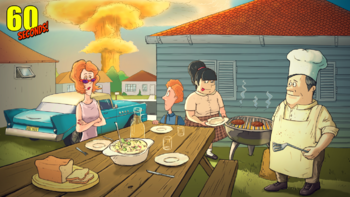 A peculiar sort of Survival Game, 60 Seconds! has you play as Ted, the husband of Dolores and the father of Mary Jane and Timmy. Life is all fine and dandy, until a bomb-warning siren goes off. Good thing you have that bomb shelter installed! You now have 60 seconds to get as many resources (and family members) as you can and make it to the shelter before the bomb hits and everything goes to hell.

Of course, that's not all. Once you get down into your shelter, you've got to wait for rescue. During that time, you'll have to keep you and your family alive and healthy by managing their food and water, along with keeping first-aid kits on hand to treat any injuries or sicknesses, and most importantly, having a flashlight or radio to signal the military and hopefully be rescued!

Developed and published by Robot Gentleman Studios, the Steam page can be found here

It was ported to the Nintendo Switch on December 18th, 2017.

A sequel titled 60 Parsecs! was announced on October 6th, 2017, and can be summed up as 60 Seconds! in space, where instead of waiting for rescue in a nuclear apocalypse, you play as a space captain from the Astrocitizen Program who has to find a new planet to stay in when Earth gets destroyed. It was released on September 18th, 2018.

An Updated Re-release of the game, titled 60 Seconds! Reatomized, was released on July 25th, 2019.