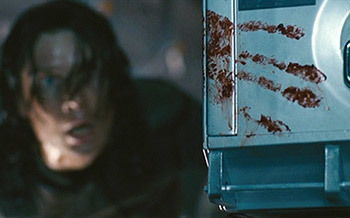 A handprint in thick blood is visible on a wall, floor, or some other surface, indicating that the person who left it is seriously injured and possibly dying. The fresher the blood, the stronger the terror. A staple in Zombie Apocalypse films and horror in general.

The Bloody Handprint may be plastered onto the White Shirt of Death for even more visceral visuals. In some cases this is combined with Gory Discretion Shot; we, the audience, are told there is a corpse in the room, but all we are allowed to see is the blood. This can be worse than a clear sight of the victim, since imagination is left to supply the details. If the protagonists are following a trail of handprints they'll be gripped by apprehension too, thinking of what must be waiting for them at the end of it. Hand Sliding Down the Glass means the handprint will be a bloody smear.

A direct extension is the use of the Bloody Handprint as a symbol, either in framing artwork such as book covers, or in-world. Used in-world it is a classic symbol of savage and violent people, turning up on flags, equipment and uniforms. Extra points if it's not paint.

This is quite logical and possible as Truth in Television, since a person's first reaction to pain in their body is to touch where it comes from. Naturally, a bleeding character's hand will get blood on it, and an alert person may apply pressure to the wound to stem the bleeding, getting covered in the stuff. Further attempts to move (to escape or seek help) with gore-coated hands will leave a trail behind, since no one that injured is going to waste time washing up. However, the preference for clearly delineated handprints, as opposed to more amorphous smudges, has more to do with communication with the viewer than the logistics of the situation.