Video Game / 100 Sleeping Princes and the Kingdom of Dreams 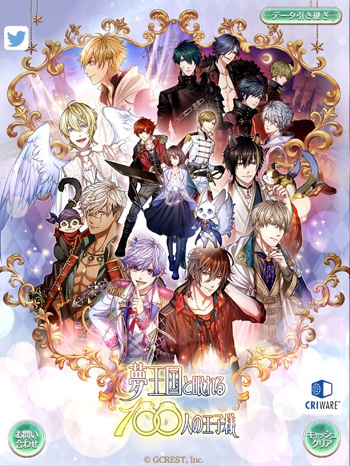 Yume Oukoku to Nemureru 100-nin no Ouji-sama (100 Sleeping Princes and the Kingdom of Dreams), or Yume 100 for short, is a iOS/Android mobile Puzzle-Otome game launched in year 2015 by GCrest, the same company that brought us its Spiritual Successor AkaSeka.

, only that it features handsome princes note Officially more than a hundred of them as of 2018, and the different clearing skills of each prince. Therefore, tactical team formation of princes plays an important part to clear stages.

As the game garnered success around East and South Asia, GCrest teamed up with animation company, Satelight to adapt the game into an original net animation, which was released in 2017. To celebrate the game's 3rd anniversary, animation company, Project No.9 adapted the game into an anime television series which premiered on July 5, 2018, making it part of the Summer 2018 Anime lineup, while Sentai Filmworks have licensed the anime and will be streaming it on HIDIVE.

The television anime centers around a newly introduced prince named Kihel, whose lost all memories of himself aside for his given name. He encounters and tags along with the lead heroine aka. The Princess of Traumere, the princess’ butler Navi, and the poster-boy of Yume 100, Prince Avi of Alstoria on their quest to defeat dream-eaters in hopes to regain his memories and full identity.