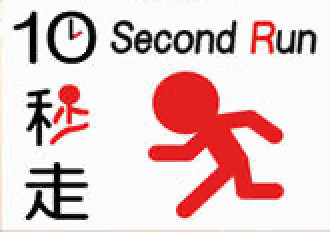 10 Second Run is a video game released in 2010 for DSiWare and in 2013 for smartphones. In it, you play as a stickman and have to reach the goal while avoiding obstacles. Each level must be beaten within 10 seconds.

A sequel called 10 Second Run Returns was released in 2018 for Nintendo Switch. It has a much higher resolution and other graphical changes, but the gameplay is still familiar.