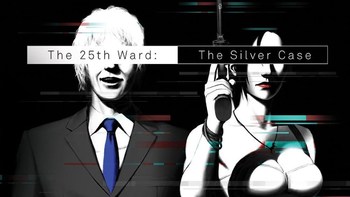 KILL the LIFE
Yet another "perfect lifestyle" has been born, and the dreamlike life based on despair contaminates the people.
Advertisement:

The 25th Ward: The Silver Case (Japanese: シルバー事件25区) is the sequel to The Silver Case and Flower, Sun and Rain. Like its predecessors, it is a Grasshopper Manufacture visual novel/adventure game directed and co-written by Suda51 with a complicated and surreal mystery story.

In the year 2005, a new 25th Ward has been built as a successor to the 24th Ward project. This so-called utopian city was constructed with the purpose of providing a perfectly orderly lifestyle, but its ideal of order is soon threatened by the impending chaos represented by Kamui Uehara.

The story is divided into three different "story threads", which each take place from a different perspective and parallel each other as they cover the same events in different lights. These are:

These three different stories together tell a labyrinthine and exceedingly bizarre tale about city infrastructure, murderous intent, big data, order and chaos, observation, and the nature of protagonists.

The 25th Ward has a complex release history; it was originally only released episodically on Japanese flip-phones in 2005, which means that very few people had a chance to play it before it went down. For this reason, it was long considered lost media and a "phantom game", until a full remake was released in 2018 on PC and PS4, complete with four new chapters (#06: white out, #07: black out, *00: UTSUTSU and *06: YUKI).