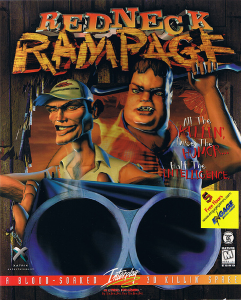 Redneck Rampage is a first-person shooter that was developed by Xatrix Entertainment and published by Interplay Entertainment. Released in 1997, It was one of the last commercial titles to use the Build engine that previously powered Duke Nukem 3D and later powered Blood, among others. Noticeably, the game uses oversized textures and sprites, which gives a higher resolution image quality than other Build engine games.

The protagonists of the game are Leonardnote (voiced by Burton Gilliam) and his brother Bubbanote (voiced by Drew Markham), who are natives of Hickston, Arkansas, where alien invaders have stolen the two brothers' prized pig "Bessie", and created killer clones of Hickston's other inhabitants. Controlling Leonard, the game has you fight through many comical enemies, including skinny old coots, feces-throwing "turd minions" and alien vixens.

Redneck Rampage was followed by an expansion pack, Suckin' Grits on Route 66, a sequel, Redneck Rampage Rides again, and a spin-off game titled Redneck Deer Huntin. Also of note is the "Cuss Pack", a very early example of a DLC, which replaced much of the game's one-liners and enemy chatter with more profane versions. Redneck Rampage also features a CD-based soundtrack consisting of licensed songs from Mojo Nixon, The Reverend Horton Heat, Beat Farmers, and other Country Music, Psychobilly and Rock 'n Roll style artists.