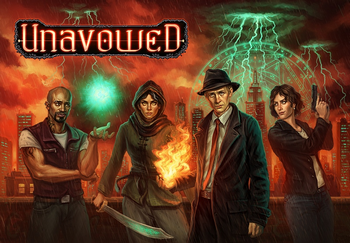 Unavowed is a 2018 Urban Fantasy Adventure Game, developed by Wadjet Eye Games. It takes place in the same universe as the developer's previous games, The Shivah and The Blackwell Series, albeit with a markedly sharper focus on said setting's fantastic and supernatural elements. Writer and head-developer David Gilbert have cited The Dresden Files, Hellblazer, and White Wolf's Old World of Darkness as strong influrences for the game's story and atmosphere.
Advertisement:

One year ago, your life was changed forever. As you were going about your rather mundane life in New York City, you had a chance encounter with the supernatural, resulting in you getting possessed by an especially insidious demon. The demon has been in control of your body for all that time, using it to spread death and horror around the city. Fortunately, you were finally tracked down by the secret organization known as the Unavowed, a ragtag bunch of experts in the supernatural sworn to protect the innocent against the forces of evil from beyond, and they were able to exorcise the demon, leaving you in control of yourself again.

Unfortunately, your old life is in tatters. You have no home, no friends, and are wanted by the police for all the gristly crimes the demon did while wearing your skin. The Unavowed, desperate for support in a time where hostile supernatural actively is sharply on the rise for unknown reasons, and seeing your potential after your ordeal from beyond the veil, decides to recruit you into their organization, putting their trust in you to help turn the tide.