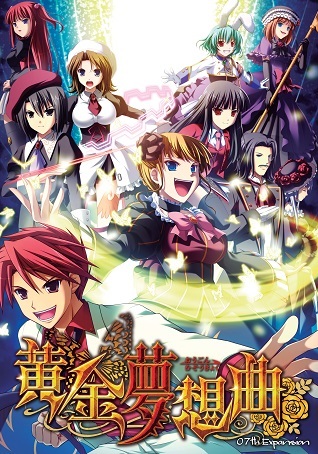 Welcome to the Symphony of the Golden Dreams
There is a lone island named Rokkenjima where the events surrounding a legendary witch repeat endlessly. When will October 4th and 5th, 1986 finally come to an end? This tale of "Umineko" seems to be a little different than usual...
"Looks like I'll be joining forces with you this time!"
"How long can you keep that facade up? You should beg if you want to borrow my powers!"
Advertisement:
Having the witch by your side is extremely reassuring. With her powers, weave a new tale on this mysterious island.

Umineko: Golden Fantasia (Released in Japan under the name Ougon Musoukyoku), is a PC fighting game in the vein of Melty Blood, developed and published by 07th Expansion, as a spin-off of the visual novel Umineko: When They Cry. It loosely follows the story of the visual novels about a series of mysterious deaths and disappearances that occur during October 4th and 5th, 1986, in the island of Rokkenjima.

The game features ten of the characters from the novels. An Xbox 360 port, Ougon Musoukyoku X, has also been released, featuring the ten characters, plus three more added to the roster. And an expansion to the PC version, Ougon Musoukyoku CROSS, has also been released, featuring all the characters from the original and the Xbox port, plus three more characters, and three others added as updates. Gameplay-wise, it uses four buttons: Three attacks (Weak, Medium and Strong), and a fourth button to switch characters. The game uses a Tag Team mechanic where you can pick a team of two characters and confront another team of two, however, both characters share the same life meter, so, if one of them is defeated, both of them lose the round. It also uses a mechanic called "Meta World", which turns the stage into a dark, macabre version of itself, and allows the characters to perform a unique Super Move.

The game was added to Steam in December 2017 under the name Umineko: Golden Fantasia, published by MangaGamer. It's basically a localized version of CROSS. And in January 2021, a download code for CROSS came with first press copies of the Symphony of Catbox and Dreams port for the PS4 and Nintendo Switch.

The first movement is beginning! BLITZ!