Video Game / Alice in the Country of Hearts 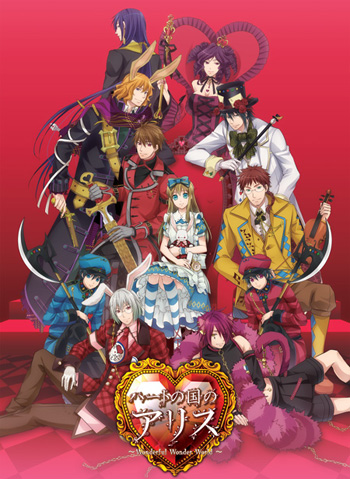 Alice in the Country of Hearts (Heart no Kuni no Alice ~Wonderful Wonder World~) is a girly but bloody Otome Game re-imagining of Lewis Carroll's classic fantasy novel Alice's Adventures in Wonderland with bishounen characters and added romance.

The games in the series so far are as follows:

There is also a manga of the first game and of Joker, which were published in English by Tokyopop, and later by Yen Press.

Alice is practical and strong, yet cynical. After being kidnapped by a mysterious Bishōnen man with bunny ears, she lands in a place called the Country of Hearts. Stuck there due to a trick by the mysterious bunny-eared man, she meets the residents of this world. In the world, everyone starts taking a liking to her at some point due to her being a foreigner.

A movie adaptation came out in July 2011.

In 2019, the games were announced to have a remake of sorts, with all new routes and romance options to explore.

Alice in the Country of Hearts has examples of: