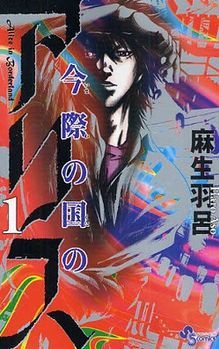 I'm tired of trying
Like my name carved on the wall
All the hypocrisy up till now
Has rusted the chronic chain of grief
On my cruising lane.
"In this world, I'm neither a hero nor a sorcerer. Heck, I'm not even a player. I'm just an NPC villager. I just wanted freedom from this meaningless reality. Escapism, delusions, Peter Pan syndrome. It doesn't matter what you called it. Haven't you also wished for similar things in your life?"
—The prologue of the OVA from the protagonist, Arisu Ryohei
Advertisement:

Alice in Borderland is a manga series created by Haro Aso.

The story focuses on Arisu Ryohei, better known as the titular "Alice". He is a juvenile delinquent with poor luck in life who's nearly finished highschool. Bored with his current life and his bad luck to the point he avoids thinking about his own future, he mostly hangs around with his friends, Daikichi Karube (a bartender at the bar where Arisu and his friends spend most of their time) and Chota Segawa (a playful person with a huge interest in pretty girls).

Like Arisu, both Chota and Karube are bored to the point where they wish they could leave their current lives behind. During their stay at the station, a firework goes off in front of them and after one blindingly bright explosion, the three are transported to another world which looks like Tokyo but is much more barren and abandoned, looking like something left After the End.

At first, Arisu, Chota, and Karube enjoy their lives in this new world. However, they eventually find another person, named Saori Shibukiu, who also got transported under the same circumstances. After the four discover a seemingly-empty festival, it's revealed that they're trapped in a place known as "The Borderland," and here, people are forced to play a deadly game and given a visa in order to stay in this world. Anyone who loses the game or doesn't play despite the visa reaching its deadline will die no matter what the circumstances are. As a result, Arisu, Chota, Karube, and Saori trie to survive in the harsh environment of the Borderland no matter what it takes, though the game can crush them both physically and mentally.

The series is licensed by Viz Media, with the first volume being released in English on March 15, 2022.

In December 2020, the first season of the Live-Action Adaptation series was released worldwide on Netflix. For tropes specific to it, see here.

Not to be confused with an Alice in Wonderland/Borderlands crossover fic.