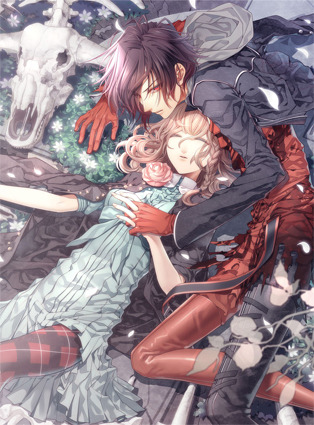 The heroine awakens in a space between dimensions, confronted by a young boy calling himself Orion. He tells her that he is a spirit and was attempting to move between worlds and accidentally collided with her, and has now merged with her mind... and pushed her memories out as well.

Now the player has the option to pick one of the worlds that represent the game's routes. And observe the story of the heroine and her quest to figure out her identity, with Orion by her side.

Amnesia was released by Otomate in 2011 and quickly became popular because of its innovative story. Instead of having a heroine attempt to win over the heart of a guy and enter a relationship with him, she is already in a pre-existing relationship. And part of the gameplay involves helping the heroine adjust to this suddenly-unfamiliar world without arousing the suspicion of those close to her.

Not to be confused with the other Amnesia videogame series or the Amnesia: Yume Nikki fan-game, or the manga Dusk Maiden of Amnesia.