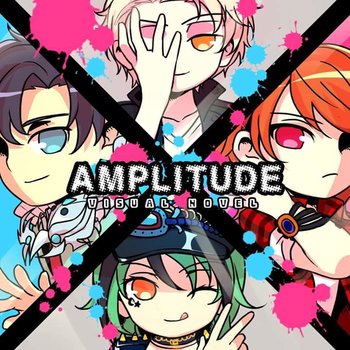 The main characters. Clockwise, from top: Adam, Katy, Eve, and Jon
"You were sure that living in the twenty-second century in a world where humans had long developed mutated abilities had made you used to all kinds of surprises. It was after you were murdered that you realized how wrong you were."
— From their IndieGogo campaign

Amplitude (also stylized as AMPLITUDE: A Visual Novel) is an English-language Urban Fantasy Visual Novel developed by the indie studio Ceylon Entertainment using the Ren'Py engine. It is funded through an Indie Gogo campaign and was released on September 6, 2017, through Steam for Windows, Mac, Steam OS, and Linux.

The game's story begins in the year 2121, in a world where the majority of human populace has a mutation that grants them superpower-like ability. Discrimination and outright bullying are facts of life for the unlucky minority born with no power whatsoever.

The player wakes up in an otherworldly tomb, feeling something is terribly off. There they meet a mysterious girl who explains the player's situation: they are but a wandering soul, having died just moments before.

Becoming aware of their situation, the Soul remembers the events leading to their death. Here the player chooses whether to play as Adam or Eve, both criminals killed during and because of their last job, but with different exacts of their occupation and backstory.

Luckily, the mysterious girl offers the Soul a chance to avenge their death. Back on Earth, two powerless teenagers are on the brink of death: Katy Black and Jon White. The Soul must then choose a body to be their Host (which will also save the body from death). Seeing no other option, the soul agrees. The mysterious girl only asks for one thing in return: that when they return to the realm of the living, they must hold on to a pendant she gives them.

Oh, and they won't remember who killed them.

Back on Earth, the Host, now inhabited by the Soul, makes a surprising recovery. Though their friends and family are slightly worried due to the Soul seemingly not remembering their own identity nor of their closest ones, they chalk it up to post-trauma stress.

As the Soul is beginning to adapt to their new body, things get even more complicated: turns out the Host's soul is still intact, cohabiting the body together with the Soul. The Soul controls the body during the daytime, the Host during the night.

Now it is up to the player to help the Soul solve the mystery of who killed them while balancing the Host's school life and personal problems. The mystery yet deepens when a dangerous organization is hunting for the Soul, who was involved with them on the Soul's last job. Per the norm of the genre, the player can also pursue a relationship with the many, many colorful characters in the cast.

Not to be confused with a Rhythm Game of the same name.