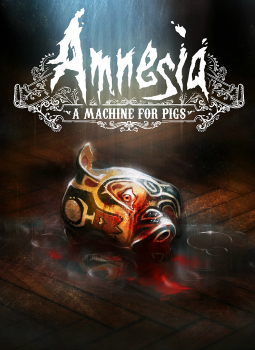 "This world is a machine! A machine for pigs! Fit only for the slaughtering of pigs!"
"He who makes a beast of himself removes himself from the pain of being human."
— Dr. Samuel Johnson
Advertisement:

Amnesia: A Machine for Pigs is a survival horror video game developed by The Chinese Room (best known for Dear Esther) and published by Frictional Games (also known for the Penumbra series) on September 10, 2013. It is an indirect sequel to Amnesia: The Dark Descent, originally started as a small mod before both companies saw potential that would be fulfilled with a larger game.

Taking place in the same universe as The Dark Descent, A Machine for Pigs is set sixty years later, in Victorian London, on New Years Eve, 1899. Wealthy industrialist Oswald Mandus has just awoken from a fevered comatose state that lasted him several months, haunted by nightmares of a vicious, dark, elaborate machine of mysterious purpose. And much more to his worry, as he attempts to shake off his confusion while stumbling around his estate, he finds that it appears to complete empty, his young sons, Edwin and Enoch, both being strangely absent. Mandus must trace his life back to find out what happened during his months of unconsciousness, discover the whereabouts of his missing sons, and figure out what happened during his ill-fated trip to Mexico that immediately preceded it...

But mostly, he finds nothing...

Nothing but the twisted monstrosities that stalk the halls, and the cogs and gears of the great machine that whirs to life beneath him.