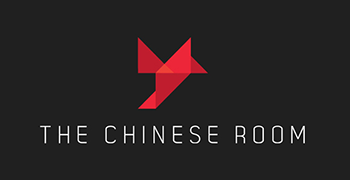 The Chinese Room (formerly thechineseroom) is a British independent video game studio, best known for making experimental first person adventure games in the Environmental Narrative Game mold, such as the Half-Life 2 mod Dear Esther, as well as its full-fledged remake.

The Chinese Room originated as a mod team for Half-Life 2, based out of the University of Portsmouth in 2007. Their name is taken from the Chinese Room thought experiment

. Some of the key members are Dan Pinchbeck and Jessica Curry. The Chinese Room's first three projects were mods for Half-Life 2, named Antlion Soccer and Dear Esther, and Doom³ mod called Conscientious Objector. Of these, Dear Esther became a cult classic. In 2009, The Chinese Room developed survival horror mod Korsakovia.

After Korsakovia, The Chinese Room worked with Robert Briscoe to develop a remake of Dear Esther, this time as a full-fledged video game title, distributed through Valve Corporation's Steam distribution service. The remake featured improved graphics, but was based on the same engine as the previous mods. The game was released in early 2012 and recouped its $55,000 investment in less than six hours of release. One week after launch, the game reached 50,000 copies sold, and is now considered a cult hit.

Games developed by the studio:

Tropes associated with the studio: